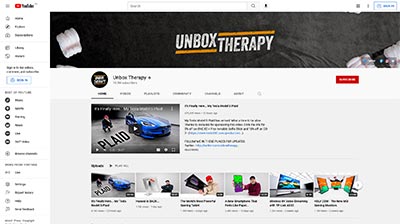 Unbox Therapy (On Youtube) rating is based upon following reviews

Unbox Therapy is a famous youtube channel and the youtube who owns this channel is know for giving away different things to its subscribers for free. I have subscribed to unbox therapy so a few days ago I received a message from unbox therapy which apparently came from their official channel as it was showing their channel profile picture and name saying I have won an Iphone 13. I am very active on youtube and I often write comments so I thought I got lucky and I became very happy. The message sender then asked for my name and contact information which I gave and later he contacted me using his whatsapp number and said that he is going to ship me the Iphone 13 but he needs me to send him $150 as shipment charges. I immediately became alert and told him to wait a bit and then I searched on google if anyone else has encountered any similar situation, glad I did so because I immediately found the twitter page of Unbox Therapy stating they never contact using WhatsApp and that some scammers are scamming people by saying they are from Unbox Therapy.
Meanwhile that scammer again contacted me asking for shipment fee, I told him to give me his contact information saying I would personally collect my iphone 13 or send someone from his city, he simply refused and stopped answering me later.
Unbox Therapy itself is a good youtube channel and they probably do give away stuff but they should probably do something to highlight this scam which is being done by using their name.
Unbox Therapy should put some notice on their youtube channel so that people don’t lose their money to scammers who scam them saying they are form Unbox therapy.
Even if you are really selected as a winner on unbox therapy, you should never pay anything for shipping as if they are giving away an iphone 13 or other expensive gifts, they can easily afford to ship them to you as well.