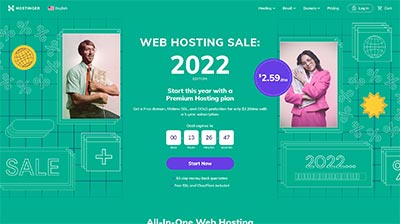 Hostinger.com is reviewed by 2 customers who gave it 3.0 stars out of 5.0. Read real customer reviews for Hostinger.com or write your own review. It is very famous and legitimate business!

Hostinger.com rating is based upon following reviews

Hostinger Does not Stand with Its Customers

I have my website hosted with hostinger. Their web hosting was fine and I was having almost no issues when suddenly one day my website started to show suspension page. When I contacted Hostinger Support, they said that I have posted some private info about a business so I have to remove it before my website can be online again. I shown them proof that those contents are on several other websites already and they can simply google the contents to see if they are private or not but they did not listen.
My website was clearly in no violation but Hostinger didn’t even listen to me and stood with the complaint party instead of own client. Their legal department never listen to you and just want to force their own decision on you no mater if it is right or wrong.
I later moved from them to another host and those contents are still on my website now without any issues with my new host.
Their web hosting works just like many other web hosts.
They don’t stand by their clients instead they stand with the complaint party. Even if someone wrongly send them any notice, they will simply suspend your website.
If your website stands in some kind of competition then your competition can easily get your website down by send false complaints to hostinger about your website.

I have stayed with Hostinger for a year or so. I moved from HostMonster to them in the hope of less CPU throttling but they were also same in this respect. The website speed is similar to hostmonster at times it get even worse and rarely gets better too. The main issue is their support system and the down time. Their uptime was pretty good actually till one month when I got my website down 3 times in a row and every time when I tried to contact their support, by the time I could reach an actual person instead of a bot my website was already up. That is weird and I started to fear that my website will suffer in the long run as who know how much time my website stays down as I cannot check it all the time. Therefore, I left Hostinger and moved to Liquid Web which is a more expensive but pretty reliable.
I don’t blame them too much as there is a general rule that you get what you pay for. They are probably already giving what they can give in that price but decide for yourself carefully. If your website has some good traffic and is paying you good then its probably worthy to buy a good hosting instead of Hostinger . However, if you have a small website which small traffic and you don’t care if your website stays down once in a while then they are good for you.

I would rate them 3 stars in comparison to what i paid them. I woudnt mind the similar services if they had realistically mentioned that in their advertisement as i know we get what we pay for. With their low prices i was already expecting this, just wanted to test one more shared host before going to better hostings like Liquid Web.
Unpredictable down time was the main thing. I might have given them one more chance by upgraded my package if there was no down time involved, the upgrade can improve site speeds but not down times. Hostinger team, if you are reading this then you need to avoid downtimes otherwise you will lose all your serious clients!
Hostinger is probably fine for small businesses who just need a website to mention on their visiting cards and letter heads. however if your website has build some traffic then they are probably not for you .