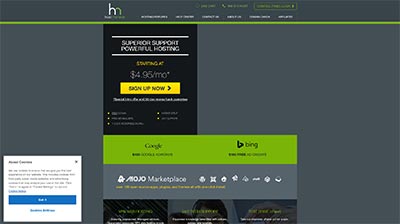 HostMonster.com is reviewed by 10 customers who gave it 3.2 stars out of 5.0. Read real customer reviews for HostMonster.com or write your review. It is very famous and legitimate business!

HostMonster.com rating is based upon following reviews

My websites get slow whenever they receive a bit traffic. I feel that search engines are penalising my websites due to hostmonster cpu throttling. I am now waiting for my web hosting package expiry to switch to Hostinger.

Hostmonster was the first web hosting i ever bought. Apart from the first card verification, everything else was good. I got free SSL certificates for my websites with autorenewal and thw websites were loading pretty fine. Though Hostmonster is not the fastest host out there yet still it is worth the price i paid. They are definitely legitimate and reliable.

Hostmonster is a very good web hosting but their support response is sometimes slow due to the enormous client base. Most of the time your support requests are not that urgent so a regular ticket system will suffice. However, if you need a fast response then you should try their phone number +1 866-573-4678.
If you are not in the United States then you should try +1 801-494-8462. All of my websites went down once due to the server going down so I had to contact them on their phone line which resulted in a rapid response and a backup of my websites was loaded on a new server for me very quickly.

Hostmonster mentioned a 30 day’s cancellation policy with full refund but they deducted $15.99 from my amount. When I contacted them regarding the deduction, blamed a free domain that I entered when setting up then hosting package. I never needed that domain and just entered a domain name because I had no other option. I didn’t want to transfer any of my domains to hostmonster. Even if they deducted for domain name, that too only costs around 10 bucks NOT 16. I am Not happy with what they did to me

I am using a shared hosting plan on hostmonster that allows to add multiple add on domains. All the websites I hosted in this package got down together 3 times I last month. I was hoping to save a few bucks by using hostmonster but it looks like all my savings turned into losses within this month as I lost almost a full day of my Adsense earnings. After this episode of downtime, I have moved to liquidweb and everything goes fine for now. There is only one drawback which is now I have to manually install ssl certificates but still it is better than having all the websites going down.

My websites get very slow during traffic hours. Sometimes they keep loading and page timeout occurs. I contacted host monster support and they said that CPU throttling is automatic and not in their control. I believe the server they put me on is already overburdened, so my websites get very slow. Despite of my demand to change my server, they took no action.

Hostmonster is an all-in-one type package. It was my first web hosting ever and apart from a bit of CPU throttling, I didn't face any other issues. My hostmonster account was able to accommodate my WordPress blog which had 30K+ monthly visitors. For shared web hosting, this is something outstanding. However, later i had to upgrade to VPS and then a dedicated server which was unavoidable. That is because after a certain traffic threshold, the CPU throttling will kick so hard that you will need to switch but that should not be an an issue for new webmasters. If you are planning to buy your first web hosting then hostmonster should be on your list of considerations.

What has happened to me should not happened to anyone else so i am reporting it here in the hope to make most people aware. I have a horrible experience with hostmonster.
Despite of all the down times and email issues my laziness kept me with the hostmonster, wish i took an action earlier. Well i had many sites hosted with them, some of them were mine, others where for my clients as i am a freelancer.
Guess what, one day they decided to change the location of my server without any advance warning, infact they didnt even tell me after doing the migration. I just became aware because non of my sites were loading, all were saying account suspended.
After several hours with their customer support i came to know that it was due to server migration and they were able to reupload my sites one day later. That was it though, the worst part is yet to come,
when i checked my sites, all of them were at a previous back up state which was old and some of my work was also lost. Even emails were missing. The hostMONSTER has eaten all my data.
That was the last nail in the coffin and I left them. I was so disappointed in them that i didn't even use the remaining time of the hosting i already paid for.

Nothing
Everything
Stay away from them if you dont want to lose data. If you are already with them, keep regular backups of your websites and migrate before you meet the same situation i met earlier.

Must Read Before Buying HostMonster!

HostMonster is definitely not a scam because I have used their shared hosting for 6 years in total by buying two 3 years hosting plans with them and then I had to left them due to several reasons I will mention in my review below. The reason why I bought their hosting for 3 years both times is because that is they only way to get their hosting in the cheapest slab. This is probably their marketing trick to keep clients with them which was handy as they were able to keep me with them for 6 years however keeping a client with marketing tricks is one thing but true way to keep a client is by giving quality services which they lack a bit.
What is the worst nightmare of a webmaster? Let me guess, it is the Site down time! That too without an advance notice! I had my sites down for quite a long time without any notice, in fact I wouldn’t have noticed if I haven’t setup my own scripts to check my sites for down times.
The second biggest issue with them was all the emails of my websites were going straight to spam folders of the receivers which was not only a communication problem but it was also causing a bad repute for my domains. So, you better not use hostmonster for hosting your main company website as you don’t want to see all your important emails going to spam folders instead of inboxes. A solution can be to use a third-party email server for this problem. But a collective cost of email server and hostmonster will easily cross the cost of buying a single good hosting in some cases unless you already have an email server of yourself.
Third issue was the CPU throttling, there was a time when website speed was not that important but that is no longer the case now. A delayed server response adversely impacts your website SEO and also affects your websites overall browsing experience. For your information, when a web crawler from search engines like Google or Bing reaches your website, it tries to crawl many pages at once which becomes difficult or even impossible in some cases due to automatic CPU throttling implemented by hosts like HostMonster.
Forth problem which didn’t happen to me as I didn’t put my traffic bearing sites on hostmonster but my other friend did report me that HostMonster suspended their webhosting accounts after reaching around 3500 to 4000 visitors per day. I can understand what could we expect from a shared hosting but still 3.5K to 4K visitors per day are too low. So, think twice before putting a traffic bearing website on HostMonster servers.
HostMonster is probably good for keeping such low traffic websites which don’t mind being down once in a while and need no reliable email support.
They are not a scam which is a good thing, also they are a bit cheap.
Unplanned and Uninformed Down times! Emails going straight to spam and CPU throttling.
If you want to buy their hosting, keep in mind that the current price they show (60% or whatever you see) is just for your first purchase, when you renew your hosting, they will charge you 100% of their price so may be its wise to take a backup of your websites a couple months before end of your hosting package and also remove your credit card number right after buying their hosting plan if you don’t want your card to be automatically charged for renewal.
Oh and one more thing, if you pay with a credit card first time, they may ask for its pics from both sides so keep that in mind before buying. That happened to me both times I bought their hosting.