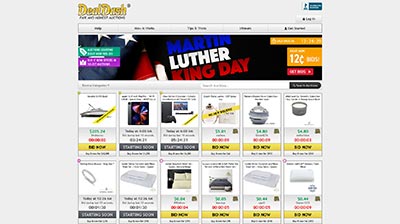 Dealdash.com is reviewed by 8 customers who gave it 1.0 stars out of 5.0. Read real customer reviews for Dealdash.com or write your review. It is not very famous so you should use it with caution!

Dealdash.com rating is based upon following reviews

Filed a complaint on BBB but no use

Dealdash is a bunch of Thieves. You will lose all your money and get nothing. You better go to a casino than using dealdash. Iost my money on bid and got nothing. Complained on BBB but no use. Stay away...

Wow, No wonder deal dash has so many negative reviews. I guess I am not alone! Have you ever calculated the amount of total bids placed on an item and then calculated what the deal dash makes out of it? They are in a win win condition while we are the losers here. Why? I initially got a few useless items for a only a few bids and was in a fools paradise. I then spend so much money on dealdash and then again once in a blue moon, i got something for apparently the friction of its price, which again gave me a little courage to spend more.
When I prepared my yearly balance sheet and prepared deal dash ledger (Balance of my spending and earning with deal dash), only then i saw how fool i was. My total spending on deal dash bids was 90% more than the actual market price of the items i got from it.
I challenge you, if you think you are very lucky with deal dash and you have spent around a year on deal dash, go ahead and prepare your balance sheet just for your spending with deal dash. check how much you have spent and how much you got from deal dash within a year. I really doubt that I can found anyone in profit here other than deal dash own employees or deal dash bots.
Come on people use your brain, stay away from this pyramid of gambling!

Dealdash.com is a Ripoff

I got ripped of by deal dash, wasted around a thousand bids and ended up empty handed, someone else which most probably was a bot got away with my item. They are worse than a casino. At least you are fully aware of what you are dealing with when in a casino. Deal dash is not even good as gambling so stay away!

I am not surprised to see a 1 star rating for Dealdash on Notscam as BBB, Trustpilot, sitejabber are full of dealdash complaints as well. I wonder why no one is taking any action against them. I dont know how many people have lost money to them. I initially thought that there are some actual people who keeps bidding at the very last second for every item on auction but now i know that they have bots who are set to bid till a certain point. They have nothing to lose since even if the bots wins the bid, its their own so nothing changes on their end, but if anyone like me keeps bidding, he will end up losing a lot more than the actual product price. Even if you buy the item at the end, you are still the loser, you could have bought that same item at much cheaper rates from your local stores. Its always a lose lose situation if you use Deal Dash.

Dont buy anything from dealdash, you can find them at much cheaper price on many online websites without any bidding. They are basically casino style thieves who only intend to grab as much money from you as possible. You keep bidding and they keep getting wealthy.

I cannot understand why Dealdash can still work in 2022. They have scripts that increase the price of every item till a certain limit at the very last second and most of the buyers are probably their own fake people due to which the real buyers like me lose a lot of money. I learnt this the hard way so don’t waste your hard-earned money and learn something from my mistake. Dealdash is a tricky gambling website and it is just as legit as a gambling business can be.

Dealdash is a scheme in which all the profit goes to the owners of dealdash.com and although some profit can go to the bid winner in some cases. However the more bids are placed, the more dealdash.com earns while the less the bid winner earns. If you are a regular user like me, you will feel that just before the timer starts to end, a random person bids again until a certain threshold is achieved. I really suspect that dealdash probably has some of its own hired people bidding on the items so that the items are not sold without giving them good profit.
When i started to use dealdash, it was somewhat better in start but that is no longer the case. i had rather gone to a casino than bidding on dealdash.
It used to be fun but now its pure waste of your hard earned money!
the bidding environment is now too much competitive probably due to their own fake bidders
It is better to buy at full price than bidding on dealdash. it will cost you more in the end.

Stay away from DealDash !

Dealdash scams you in a very creative way, I personally never use such sites but I know a person who spent or should I say lost a lot of money on dealdash and bought items which would have costed him much less if directly bought. The trick is behind the apparently small amount per bid that you and all other people spend on the item being sold. All you need is a simple calculated and you can do the math to get and idea of how much they earn from us.
The problem is most of us only see the number of bids we spent plus the final price we paid and just compare it with the price of the item we won. We just forget about the bids we lost on the items we didn’t win which is totally wrong.
The correct formula to calculate the actual cost of the items you get from Dealdash is
(Total amount you spend on Dealdash to date / Total estimated price of items you got from them to date)
Now this will actually tell you if you are in profit or not. I bet most of the Dealdash users will find themselves in loss using the above formula.
Dealdash is just like a modern online casino with a different approach. Some of the people lose their money while others win and get the benefit and the Dealdash is always in profit just like a casino owner. I hope you got my point.

Absolutely Nothing
I would have given them negative rating if possible
Remember, if you win a bid today, you will lose one tomorrow but Dealdash will never lose their money so it’s a modern scam which you should stay away from!