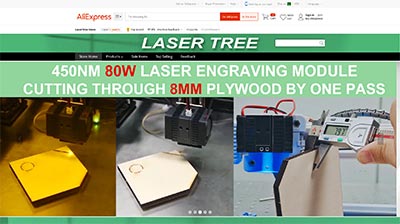 LaserTree Store on Aliexpress rating is based upon following reviews

Lasertree 80W module is better than others but dont expect too much from it. The laser module is almost as powerful as two 5W modules combined, its just that the upgraded lens has better concentrated the beam at the spot. Good for black acrylic but any kind of transparent acrylics are out of question. Also although i can cut light wood with it, the finishing is not that great! The best use i can think of it is as black acrylic cutter.
Also make sure to use proper air ventilation when cutting acrylic or even wood. The fumes generated can be very toxic for your lungs.

Their 80W Laser Module is Powerful But not Truly 80W

I bought an 80W and 450nm module from Lasertree store as I already have their 30W module installed in my laser engrave. I wanted to cut at higher speeds so I bought an 80W module. I have to say that it worked OK. The module is taking somewhere around 4A at 12V so its taking 48W max, It outperformed the 30W module as expected but the performance is not doubled. I had to run 3 passes at 100% to fully cut 6mm Ply which is much faster than my old 30W but it could do better. The cutting depth is increased but not doubled. The reason why i am posting it here on not scam is because i wanted to communicate to lasertree store that they should mention true details for their laser modules instead of making them up to raise their sales like many other stores on Aliexress. Their 80W laser module is a bit better than their 30W module but it certainly is not 80W from any point of view.
It is taking 40 to 48W of power from my power supply and the optical power is certainly below that so i feel a bit deceived in this respect. I also think the module is a bit overpriced. These are the reasons due to which i have deducted one star from their rating.
The old 30W module I bought from them is still working so they are not a scam. I hope the new 80W module keeps working too.
As mentioned earlier, I think they misguide you about the technical details a bit in order to increase their sales which i definitely dont like.
If you just need to cut card board, paper and similar stuff then this 80W module is an overkill for you and also more dangerous, you should better take their 30W in that case.