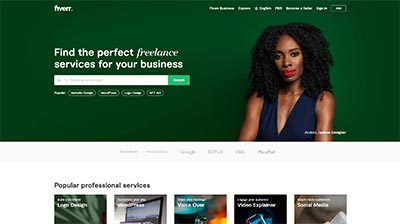 fiverr.com is reviewed by 3 customers who gave it 3.7 stars out of 5.0. Read real customer reviews for fiverr.com or write your own review. It is very famous and legitimate business!

fiverr.com rating is based upon following reviews

Fiverr is Genuine and Legit

I have sold many gigs on fiverr and I can now afford to carry on my studies. If you have any talent such as designing skills or you can program or develop websites then you can earn a decent amount on Fiverr. You wont get rich but you can pay for your bread and butter.

Bug in Fiverrs own Dashboard

I have yet to test Fiverr as a platform because it is not letting me post any Gig due to incomplete profile which due to some bug in their system I am unable to complete. It is stuck at 95% complete and no mater how many times I click on continue buttons, it stays there. It is defiantly a bug, i tried to search on google and found others with similar complaint but was unable to find a solution. It is just a turn of when you see bugs in a freelancing platform itself because at least the freelancing platforms should keep themselves bug free. I am now opening a support ticket on fiverr for this issue and i will update my review once its resolved.

I am from Syria and I work on freelancer, upwork so I made a profile on Fiverr.com to give it a test. I have experience in freelancing so I have quickly completed some orders. Its good that I was only using fiverr for testing purposes and had no dependency on them as they suddenly banned my account without any valid reason. When I contact them, their support guy said that they are not allowed to work with Syrian people. No one has ever treated me like that on any other freelancing marketplace so I further investigated and found that the Fiverr is an Israeli business which is operating from Tel-aviv.
Apparently as their support said, they have some Racist laws that doesn’t allow them to conduct business with citizens of my country. I have saved the snapshots of their chat and I could have shared them here if there was a way to do so.
I got some work on Fiverr.com so I would have rated it 4 stars but this racist behavior doesn’t allow that. They deserve 2 stars at the best.
The way they treated me on fiverr.com made me think I am an alien mistakenly landed on their planet.
If you are working on Fiverr.com I suggest you should not stay dependent on them and strengthen your profiles on other marketplaces like Upwork and freelancer etc. They will ban you anytime without any warning and any valid reason. BTW I am glad they banned me though as I was wasting time on their site anyways, I can make much more in the same time now on Upwork.